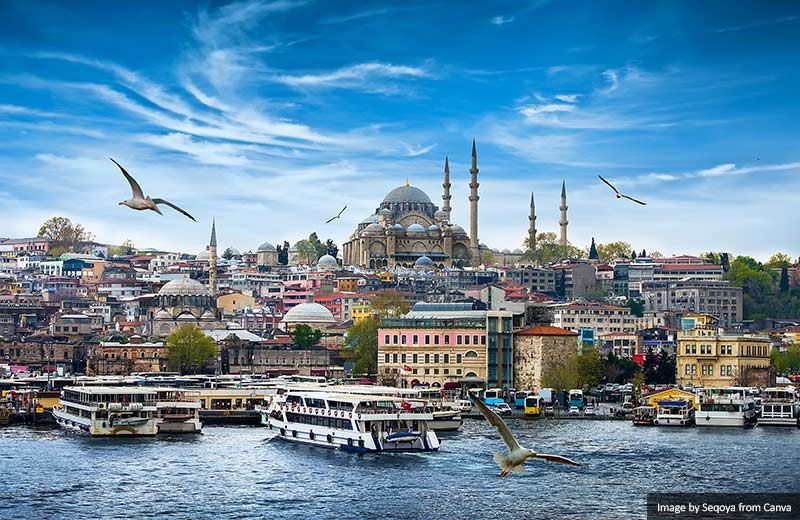 Upon your arrival in Istanbul, you will be welcomed and transferred to your hotel in the old city. A welcome package with tour vouchers, an Istanbul map, and any other touristic information will be waiting for you upon arrival at your hotel. Free time is given for the rest of the day. Overnight in Istanbul

Today you will have a full-day guided tour of the …

Hagia Sophia Mosque, the pride of the Byzantine architecture and converted to Mosque again.
Byzantine Hippodrome, where chariot races were held
Blue Mosque, famous for its blue Iznik tiles. Hand-painted blue tiles adorn the mosque’s interior walls, and at night the mosque is bathed in blue as lights frame the mosque’s five main domes, six minarets and eight secondary domes.
Suleymaniye Mosque and Tomb of suleiman and Hurrem Sultan, The mosque was commissioned by Suleiman the Magnificent and designed by the imperial architect Mimar Sinan. An inscription specifies the foundation date as 1550 and the inauguration date as 1557
Eyyup El Ensari Mosque & Tomb, Eyüp Sultan is believed to have died during the first Arab siege of Constantinople in the 670s. His tomb is greatly venerated by Muslims. The mausoleum is on the north side of a courtyard opposite the main entrance to the prayer hall of the mosque.

After breakfast, you will be transferred to airport for your outbound flight .

7 Nights Accommodation in 4-star Hotel- Grand Yavuz Hotel in Old city or similar Twin/Double Sharing Airport Transfers on a private basis English Speaking Guided Tours as per itinerary Entrance Fees of the sites Meals as per itinerary Based on Seat in coach basis. Available everyday.

Interested in this package? Fill out the form and we'll get you a quote in no time →

This is a small charming hotel with a funky vibe ideal for families, couples or groups of friends. Set on a lagoon, it is within walking distance of the beach (across the road) and only 5 minutes b...

At this relaxed hotel in Trou d'Eau Douce, every day feels like a Friday. Set right on a beautiful white sandy beach offering a choice of facilities. Barefoot pleasures for families, couples or fri...